STAND UP SPEAK OUT 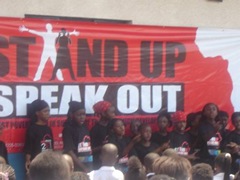 Micah Challenge Zambia on October 17, joined with other people from all around the world to STAND UP and SPEAK OUT against poverty. This event is an initiative started by the UN Millennium Campaign and Global Call to Action against Poverty (GCAP) with the aim bringing together people and organizations around the world to fight poverty. This event is designed to enable citizens to demand that their governments honor their commitments. In 2000, world leaders made a commitment through the UN Millennium Development Goals to halve poverty by 2015. Micah Challenge Zambia’s theme was, “access to quality education and equality”.

Students at the theological College of Central Africa also had special Chapel set aside for this event. Mr. Gehani Ntaimo, former Jubilee Centre Volunteer, also organized 70 students at The National College for Development and Business Studies in Kabwe. In the evening over a hundred people gathered for a debate Government efforts in meeting the MDGs.Officially we had a total of 8,621 people taking part in this event.

World wide over 43.7 million people, in 127 countries broke the Guinness World Record – set last year at 23.5 million – for the largest number of people to “STAND UP AGAINST POVERTY” in 24 hours. The “Stand Up and Speak Out” record attempt took place over 16th and 17th October and was jointly organized by the

United Nations Millennium Campaign (UNMC) and the Global Call to Action against Poverty (GCAP) with a wide range of other partners. The challenge saw millions of people physically and intentionally standing up against poverty, inequality and in support of the Millennium Development Goals.  They spoke out to demand a more urgent political response to the growing crisis of global poverty. United Nations Secretary General, Ban Ki-Moon when he led a stand up action at UN Headquarters in New York, said “Today tens of millions of people are making their voices heard by standing up and speaking out against poverty and for the Millennium Development Goals. They are sending messages that call on their leaders to keep their promises. They are calling for the actions of citizens to be matched by the actions of Governments, in developing and developed countries alike, to demonstrate the political will required to end the scourge of poverty once and for all.”

THE ROLE OF THE CHURCH

A prayer meeting dubbed the Stand Up and Speak Out prayer gathering took place on the 8th of October at the Bread of Life Church, Green Village, Ndola for pray for the stand up and speak event.

This meeting graced by the Ndola District Commissioner Mrs. Gladys Kristafor. Over a hundred church leaders took part in this prayer event. Special prayers came from 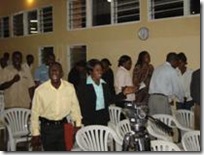 During this prayer meeting there was a special presentation in form of Songs & +Poems on poverty by the Mapalo Bread of Life Community School, where at least a hundred churches took part.

Stand Up and Speak Out against Poverty and inequality campaign is an exiting and innovative challenge aimed at setting an official Guinness World record for the most number of people to STAND UP against poverty. The physical act of standing up against poverty is in itself a strong symbolic statement by the citizens of the world that we will not sit by and watch billions of people going hungry amidst all the riches of the world.  Micah Challenge Zambia has taken up this opportunity to bring organize this prayer gathering so that Christians can meet to pray together to bring poverty situation in our country before God.

Micah Challenge Zambia ’s involvement in the stand Up against poverty campaign is a response to the biblical “to do justice, and to love kindness, and to walk humbly with [our] God” (Micah 6:8). We strongly believe at Micah Challenge Zambia that our God is a God of Justice and He defends the cause of the weak and vulnerable in our society.  Therefore, God is interested in our situation in Zambia, He would like the church to stand in the gap by being a moral force as we campaign for the MDGs.

Furthermore, at Micah Challenge we are concerned that midway through the

Millennium Development Goals (MDGs), Zambia and other African countries are way below achieving most goals and targets in spite of significant progress made since the onset of the MDGs in 2000.

What is most worrying is that Zambia is off track in achieving most of the goals, despite the positive indicators with regard to the economic growth. In Zambia we have realized accelerated economic growth and working towards poverty reduction. However, our greatest challenges are: tackling the HIV AIDS pandemic and other diseases, fostering good governance, reducing poverty, provision of quality education for all and achieving gender equality.

The 17th of October was full of activities. We targeted school children from Nursery schools to post secondary institutions. Most children were eager to participate. As a result we had various activities raging from drama, poems, discussions, songs and sports. At one nursery school, the children had a public discussion on the causes of poverty.

One small girl aged 5 years argued that poverty is caused by beer drinking. She told a story of how her father misuses the money for food on beers and as a result the family remains without food.  She went on to say that this results in mother fight with father in the home. Other children shared similar story stories and the children where of the opinion that if beer drinking was banned in Zambia there could be no hunger in most homes. It was heartening to see that children in nursery schools able to take part in this world wide event. By2015 the children in nursery and primary schools will be their teens and this is the right time engage with them. At St Andrews High School we had a football game between grade eights and grade nines. The march was symbolic of kicking out poverty.

The Stand Up Speak out event was made possible with the support from Micah Challenge international, Tear Australia, Tear Fund UK, The 2015 Millennium Campaign and the Support of Staff from jubilee Centre and Evangelical Fellowship of Zambia.

The Stand Up and Speak Out event was organised within a period of two weeks. This gave us a u number of organisation hurdles which needed to be overcome due to time constraints. For next year’s event we need to put in place the following measures:

· Have a clear budget line for the event

· Train event facilitators. These could be pastors, teachers and other church members

· Extend the event to other urban towns on the Copper belt

· Plan for events like a music concert, sports activities, community leaders escorting their respective Members of Parliament to the local Market to buy breakfast, lunch and supper using the equivalent of one US Dollar.

· have a strong media presence

This entry was posted on 22 February 2008 by Micah Challenge Zambia. It was filed under Events .

Get our latest news by email